skip to main | skip to sidebar

How Can Solar Variability Affect Hurricanes? 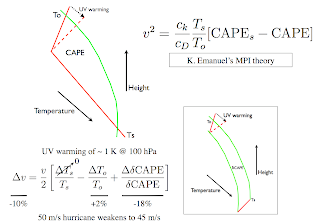 An inverse relationship between hurricane activity over the Caribbean and the number of sunspots has recently been identified. Here we investigate this relationship using daily observations and find support for the hypothesis that changes in ultraviolet (UV) radiation are the cause. The relationship is statistically significant after accounting for annual variation in ocean heat and the El Nino cycle. A warming response in the upper troposphere to increased solar UV forcing, as measured by the Mg II core-to-wing ratio, decreases the atmosphere's convective available potential energy (CAPE) leading to a weaker cyclone. The response amplitude at a hurricane intensity of 44 m/s is 6.7 m/s +/- 2.56 m/s per 0.01 Mg II units (s.d.), which compares with 4.6 m/s estimated from the heat-engine theory using a temperature trend derived from observations. An increasing response sensitivity with increasing hurricane strength is found in the observations and in an application of the theory. Read more. Citation: Elsner, J. B., T. H. Jagger, and R. E. Hodges (2010), Daily tropical cyclone intensity response to solar ultraviolet radiation, Geophys. Res. Lett., 37, L09701, doi:10.1029/2010GL043091.
Posted by James Elsner at 10:48 AM